Until education equals learning, the rights and potential of children will remain un-realised

November 20th is World Children’s Day. The UN calls it a day “ to advocate, promote and celebrate children’s rights.”

And key among those is the right to education.

Superficially, states have made great progress in ensuring this right is realized. Decades of enrollment drives mean that around 90% of primary age children are in school. 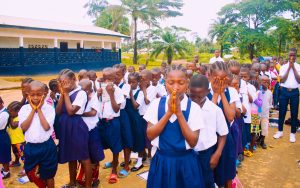 But to have any meaning, the right to education must ensure learning. For most children around the world, it does not.

According to the development economist Professor Lant Pritchett, Director of the Research on Improving Systems of Education (RISE) Programme at Oxford University’s Blavatnik School of Government,  such a catastrophic scenario exists because – incredibly – many education systems simply do not prioritize learning.

UNICEF estimates that two out of every three 10-year-olds globally cannot read a simple sentence. Hundreds of millions of children around the world are in school, but learning nothing. Their right to education is hollow.

Africa has a particular challenge, as a new UNESCO study of foundational learning in Africa spells out.

But such a daunting situation is also inspiring increasing numbers of African Governments to action, with the goal of driving economic development by unlocking the dormant potential of so many of their young people.

In Liberia, the Liberia Education Advancement Program (LEAP) an innovative public private partnership has been running since 2016, designed to address the educational crisis through the provision of quality learning outcomes, and optimized delivery models.

Under the LEAP Program, education providers are paired with public primary schools across the country to deliver on the goal of the program currently covering 487 schools and over 120,000 students..

Bridge Liberia, is the largest partner in the LEAP Program, supporting over 300 schools with technical support from its partner; NewGlobe which is supporting proactive governments that are seeking to transform their country’s education system.

An independent study led by Professor Michael Kremer, the Nobel Prize-winning economist, used a randomized control trial to measure the effects of NewGlobe’s teaching methods in schools in Kenya – the same methods underpinning educational programs in Liberia, Lagos and Kwara States in Nigeria and Manipur State in India, RwandaEQUIP, EdoBEST.

It found learning effects “among the largest in the international education literature, particularly for a program that was already operating at scale”.

There is overwhelming evidence that such a data-driven, evidence-based focus on driving up learning outcomes works.

Crucially, the biggest learning gains came in early years. Pre-primary children were nearly a year-and-a-half of additional years of learning ahead of peers in other schools after two years. Primary children were nearly a year ahead. Grade One students in NewGlobe-supported schools – typically age six or seven – were more than three times as likely to be able to read as their counterparts.

With such an overwhelming economic argument in favor of learning, why are so many education systems still broken?

One reason, highlighted in the same UNESCO study of foundational learning in Africa, is the current inability of so many to gather accurate data, detailing what students know, and how they progress, to make good policy decisions.

Bridge Liberia is solving this problem alongside the Liberian Government for public schools they support.

Teachers in the Bridge Liberia ecosystem are supported with tablets to deliver bespoke lesson plans optimized for their students. They also provide a feedback loop of data. Without it measuring and driving improvement is impossible.

The tablet also provides data around attendance of teachers and students, time and dates lessons are taught and completed among others, which are key metrics learning is measured by.

The theme of this year’s Day is

“Inclusion, for Every Child.”

But to drive development and economic success for all children, their communities and their countries, we need to see the day when the right to education is coupled with the right to learn. That will be a World Children’s Day to celebrate even more.