Major education projects, skills development and the upsurge in investments leveraging technology for education were the main focus of Africa’s number one high-level ministerial forum Innovation Africa from the 16th to 18th November 2022 in Lusaka, Zambia. This 10th anniversary edition of the summit was held under the patronage of the Government of the Republic of Zambia and led by the President, Mr. Hakainde Hichilema. 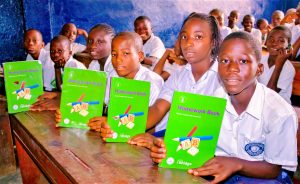 Hundreds of government ministers and officials traveled  across the continent to attend the summit  including the Liberia Minister of Education, Hon. Prof. Ansu Sonii alongside Assistant Education Minister for Early Childhood Development, Thelma Nimmo.

This high-level Liberia delegation along with counterparts from at least 24 other African countries engaged with other stakeholders on topics key to the education agenda of the summit.

The focus on education in this year’s event is pivotal to the learning poverty crisis currently faced in Africa and beyond. A situation so serious it is a key focus of the UN Secretary General Antonio Guterres, particularly in the area of foundational learning, main theme of The Education Summit (TES) ahead of the United Nations General Assembly in September 2022 culminating in UNICEF leading a new Call To Action on education. The Innovation Africa summit education rich agenda provides an opportunity for African countries to fulfill this call to action, which is key as the learning poverty has become even more pronounced in post pandemic Africa.

Case in point, our Liberian delegation is attending this conference against a backdrop of Liberia  being one of the countries in the word with the highest levels of dropped-out school children, with an estimated 15 percent not in class. Meanwhile, just over 54 percent of children complete primary education (UNICEF). According to an ONCHA Report, over 15,000 Liberia children were in the streets performing different forms of child labor, from street hawking to bus conductor among others. The case is even worse for children in Early Childhood. Under a third of 3-to-5 year-olds benefit from early childhood education (ECE), and overage enrollment is common. Nearly 50 per cent of students enrolled in ECE are 6 years of age or above. Many learners start ECE late and subsequently do not enter primary school until they are 8 to 10 years old, according to UNICEF on the situation of Liberia Children Report.

Liberia is not alone in this situation, as a result of the worst shock to education and learning in recorded history, learning poverty has increased by a third in low- and middle-income countries, with an estimated 70% of 10-year-olds unable to understand a simple written text, according to a new report published by the World Bank, UNESCO, UNICEF, UK government Foreign Commonwealth and Development Office (FCDO), USAID, and the Bill & Melinda Gates Foundation. This rate was 57% before the pandemic, but now the learning crisis has deepened. This generation of students now risks losing $21 trillion in potential lifetime earnings in present value, or the equivalent of 17% of today’s global GDP, up from the $17 trillion estimated in 2021.

This report, The State of Global Learning Poverty: 2022 Update also tasks countries on the need to concentrate their efforts on the most cost-effective approaches to tackle learning poverty. It states that these interventions must be implemented as part of a national learning recovery program that can also serve as a springboard for building more effective, equitable, and resilient education systems. Dr. Benjamin Piper, Director of Global Education, Bill & Melinda Gates Foundation was quoted as saying

“we have solutions that can work at scale and in government systems. Committing to substantial learning recovery programs is a start, but the composition of those programs matter: measure learning outcomes, but also invest in improving instruction through structured pedagogy”

In Liberia, based on these suggestions, there are bright glimmers of hope for effective scalable education transformation as seen through the Liberia Education Advancement Program (LEAP), with Bridge Liberia as the Government of Liberia largest partner in the program. Through LEAP, the Governments of Liberia has committed to driving up standards and outcomes across the education systems, with measured gains in literacy and numeracy in weeks.

The program is supported by data-driven technology solutions in partnership with NewGlobe, a social enterprise which supports national and state governments by creating powerful technology-enabled education systems.

Bridge Liberia is currently supporting over 300 public primary schools and improving learning outcomes through system transformation for over 75,000 students in Liberia. The impact of this support shows in  numerous randomized control studies conducted to measure the impact of the program. The Learning in Liberia Year 3 study shows that eighty-one per cent of students who joined a Bridge Liberia supported school under the LEAP program in the first grade and have now spent 2½ years in a Bridge Liberia supported classroom are proficient or basic readers; compared to only 33% of students in traditional public schools.

The combination of structured pedagogy with the gathering of real-time data for accountability and feedback, is one recommended by the World Bank, as governments everywhere deal with the impact of the Covid-19 pandemic, and the school closures which accompanied it, on children’s education.

This holistic learning methodology was the subject of a 2-year study led by 2019 Nobel Prize winning professor Michael Kremer. The Kremer Study finds that NewGlobe methods deliver unequivocal major learning gains across every academic year in NewGlobe-supported schools, compared with other schools. These are particularly large in the “key grades” for Foundational Literacy and Numeracy (FLN), primary classes One and Two. Kremer and his co-authors found that students in early childhood years supported by NewGlobe received the equivalent of an additional year and a half of learning in two years.