Nobel prize winner Prof. Michael Kremer’s recent study on education proves that the Liberian Government made the right decision in 2016 when it led the way in Africa and implemented an education partnership programme dubbed the Liberia Education Advancement Program.

The Liberia Education Advancement Program (LEAP) of which Bridge Liberia is the largest partner, is now a model for partnership in education on the African Continent especially in west Africa.

It was not long before Nigeria especially, took cue from such a partnership in education and began similar programs in Edo, Lagos and Kwara States in 2018,  2019, and 2022 dubbed EdoBEST, EKOEXCEL and KwaraEARN respectively.

The study, though conducted in one of NewGlobe’s programs in Kenya, reveals staggering information about NewGlobe’s teaching methodology which is used in all of the social enterprise’s network of education programs including Bridge Liberia.

The study among other things finds that children taught using NewGlobe’s methods are more than three times more likely to be able to read a sentence by the time they are in first grade, relative to  their peers in other schools.

Also, according to the study, girls make the same leap in learning as boys in NewGlobe schools, a disclosure that was welcomed by the House Committee Chair on Education Hon. Mariamu Fofana, considering that Bridge Liberia shares similar methodology with the program in Kenya. 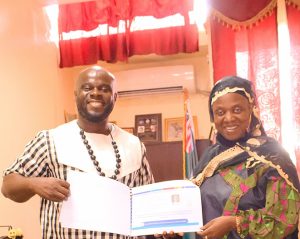 I am very pleased based on my own interaction with Bridge Liberia and the schools they are managing in Liberia. Their model of teaching is really helping our children. The fact that the approach puts girls on the same path with boys makes me happy. Indeed when you give a girl equal opportunity as the boy, she would learn equally, if not more. And I am highly pleased that there is research that shows that indeed this system that is used in other countries is the same used at our schools supported by Bridge Liberia and it is getting international recognition.

The results from the Kremer study are an affirmation of NewGlobe’s integrated learning system that improves education outcomes at scale.

The learning gains recorded in the study, if replicated at scale across public systems, could put students on track to match academic performance levels achieved by peers from upper-middle income countries, pushing their countries up education league tables to match countries with incomes three or four times greater per person.

Sen. Moye and Rep. Fofana, both staunch supporters of education, take keen interest in the education sector and at times visit schools supported by partners across the country.

They have over time commended Bridge Liberia for the level of monitoring and supervision at schools they support.

Bridge Liberia, which is technically supported by NewGlobe, uses technology alongside in person supervisors to monitor and supervise all schools in their network on a daily basis. As a result of this, teachers and school leaders are monitored to ensure they attend classes and deliver lessons as per the prescribed curriculum, something that is a challenge to other schools across Liberia.