In 2016, when the Liberian Government through the Ministry of Education announced Partnership Schools for Liberia (PSL), now known as the Liberia Education Advancement Program (LEAP) an innovative public private partnership, the goal was to strategically transform the primary public education system and improve learning gains for the students covered under the program. 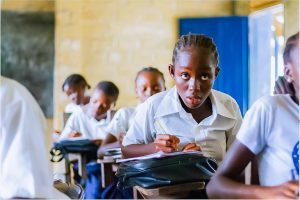 Now in its 7th year, the program has four education providers supporting the Government education agenda in all of Liberia’s 15 counties.

These independent studies are backed by the performance of students sitting the Liberia Primary School Certificate Examination (LPSCE), a model of the West African Examination Council (WAEC) Exam for third and sixth graders in Liberia.

The pilot for the exam launched in 2021 and has been administered to third and sixth graders every year in four subjects; Language Arts, Mathematics,
General Science, and Social Studies. The 2021/2022 edition of the examination saw students from Bridge Liberia
supported schools performing excellently with 94% passing rate of the total students that sat the examination.

A total of 2,256 students from Bridge Liberia supported schools sat the exam during the 2021/2022 sitting, with a whooping 2127 students passing.
Female students constitute 950 while male students make up 1,177 of the total number.

These results are clear evidence that Bridge Liberia is delivering far beyond the set government’s goals and radically shifting education in Liberia by
leveraging technology and innovation to tremendously accelerate student learning outcomes in the government schools it supports. With the growing evidence about the unprecedented scale of the learning crisis and an increasingly public acknowledgement by leaders that the 2030
SDG-4 goal – the provision of quality education for all by 2030 – will not be met. Such learning gains for students especially in low income communities and government schools can’t be understated; this is celebratory news for Liberia.

Such results are in contrast to the recently published World Bank Report on Education with the Bank drawing down on the achievement of its goal of
reducing learning poverty. Indeed, learning poverty can be reduced with educational providers like Bridge
Liberia and its umbrella organization NewGlobe supporting governments with programs designed to achieve learning outcomes amidst the most challenging
circumstances for public school students.