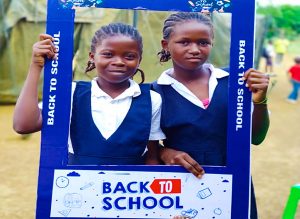 As part of Bridge Liberia public awareness campaign to support the government’s enrollment and retention initiative of students, the social enterprise is calling on parents and guardians in the reach of its over 300 supported schools across the country to have their children enrolled.

The government’s  largest partner in the Liberia Education Advancement Program (LEAP) is currently supporting over 300 schools where teachers are well trained in  teaching principles, techniques and technological skills that a contemporary teacher needs for the effective delivery of learning materials in the classroom.

Gbovadeh Gbilia, Bridge Liberia MD reaffirming the organization’s commitment to ensuring children leave the streets and return to the classrooms, discouraged parents from sending their children to sell during school hours.

Parents are encouraged to make Bridge Liberia supported schools the choice for their children this academic year, to improve their learning.

At the government primary schools supported by Bridge Liberia, teachers are also trained to call on both boys and girls in the classroom to respond to a question via a classroom technique known as cold calling thereby supporting girls to make the same leap in learning as boys.

A recent groundbreaking study also conducted by Nobel Prize winner Prof. Michael Kremer, shows that for early childhood development (ECD) – typically 3 and 5 year olds – children gain nearly an additional year and half of learning; learning in two years what students in other schools learn in three and a half years.

The study among other things finds that children taught using NewGlobe’s methods are more than three times more likely to be able to read a sentence by the time they are in first grade, relative to  their peers in other schools.

The back to school initiative is targeting school going children who are used as breadwinners during school hours and underprivileged children whose parents and guardians cannot afford to send their children to school,  both in rural areas and Monrovia.

A 2006 report by OCHA disclosed that over 15,000 Liberia children were in the streets performing different forms of child labor, from street hawking to bus conductor among others.

This year, partners supporting the government are making deliberate and intentional efforts to ensure that school going children return to the classrooms and stay in school.

Every county in Liberia has a school supported by the education provider. Parents only need to contact these primary schools and jump start their children’s education.